Monday, the last night of April, is the first night sleeping aboard.

We’re moored up at Salter’s Lode on Well Creek, waiting to cross the tidal section and through Denver Sluice lock, onto the River Great Ouse. It was a cold and windy passage from March, once we said goodbye to Tracey and Alan at Fox Narrowboats, through the town with its riverside gardens and boathouses, and out onto the Fen of the Middle Levels.

Viv experienced her first lock at Marmont Priory Lock, as we were helped by the Lock-keeper, and on we went, undecided whether to stop as we yearned for the warmth of the woodburner. 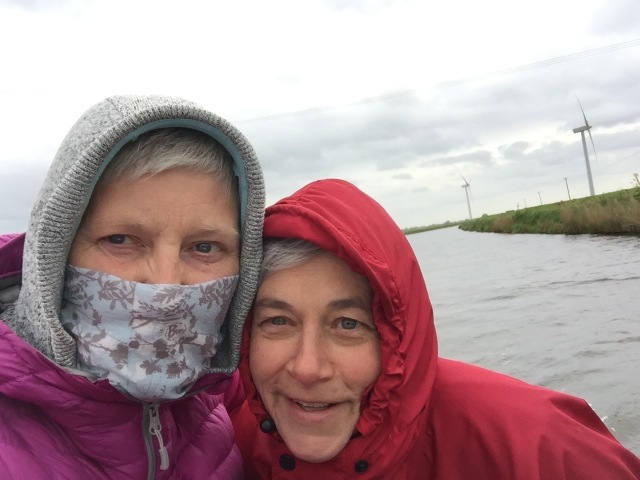 But we pushed on, and finally moored up at Salter’s Lode at about 8 pm.

Originally there was a Roman Road from Swaffham and the Devil’s Dyke to Denver and from there, on older silts, over the fens we travelled through – Upwell, Outwell and Nordelph – to March, Whittlesey, Stanground to Peterborough. The Romans started the process of draining this area, but their works fell into disrepair and the land reverted to watery bog and fen – its natural state. Now, as we drove along (‘driving’ is correct word for narrow boats) we were often many feet above the surrounding land and houses. The peat soil has shrunk, or blown, and depleted.

The story of the draining of the fens and the forming of the waterways that we travelled on Monday and through this week as we go towards the river Lark is a long and fascinating one. By the 13C and 14C as the estuary at Wisbech became clogged, the Nene and the Western Ouse flowed increasingly along Well Creek, though navigation was obstructed at Outwell. The Bishop of Ely, John Morton, built Morton’s Leam in 1478 to carry the Nene from Stanground in Peterborough to Guyhirn – setting the precedent for all the major 17C drainage works. In 1605 Sr John Popham, hated by the people for taking their land, cut a straight Popham’s Eau northeast of March to the Well Creek.

But a more regional vision was needed, and in 1630 a group of landowners approached Francis 4th Earl of Bedford and Sir Cornelius Vermuyden was appointed. Between 1631 and 1637 Vermuyden improved many existing drains and built the Bedford River which ran from the new sluice at Earith to Salter’s Lode.

This Mayday morning we will drive through the lock that stops the tidal water flooding up Well Creek and out onto that tidal Bedford River, taking the rising tide a third of a mile upriver to Denver Sluice, and through the lock there onto the River Great Ouse.

This massive sluice is testament to human effort to keep the water at bay. The floods of 1953, and again in 1998, leave you wondering, though, just how long it will be before the advice of the Board of Agriculture in 1925 becomes reality that  the Fenland ‘return to primeval conditions’. The land is farmed extensively, beyond viability with the soil now exhausted in many areas. Throughout the river basins that feed the Fenland Rivers industrial and residential developments continue, the paved areas feeding the water faster into the rivers. Ever more efficient agricultural drainage has the same effect. As climate change means greater rainfall, all this water has to find its way to the sea over land which is below sea level, in rivers whose gradients are decreasing and whose flood plains have been reduced. It makes you wonder what the future holds.

High Tide is at 10 am this morning, and an hour before, under instruction from Lock-keeper Paul, we will enter the lock and watch the water rise until there’s enough to take us out onto the tidal stretch. The flooding water will speed us up river, a short distance, before we swing around the sand bank and bring TLA alongside the waiting quay to go through the lock that sits alongside the massive sluice that keeps out the salt, and controls the water throughout the Fenlands.

When we get to Ely – our destination for this evening – I’m going to buy a copy of Graham Swift’s Waterland (a visit to the brilliant bookshop Toppings is obviously required). It’s a great novel about these parts, weaving together the history of the drainage of the fens, the story of the eel, and the tragic account of past events, all of which capture the strangeness of this watery land.

As I wake this morning, already I’m used to the motion that is a constant reminder that we are in a different element now; no longer on sure foundations. Now we are aware of weather, wind and flow.

It’s always a temptation to try and see the bottom – to look over the side and watch for fish. William Wordsworth recalls hanging over a slow-moving boat, solacing himself

With such discoveries as his eye can make

Beneath him in the bottom of the deep,

Yet often is perplexed, and cannot part

The shadow from the substance, rocks and sky,

Mountains and clouds, reflected in the depth

Of the clear flood, from things which there abide

In their true dwelling; now is crossed by gleam

Of his own image …

Too often all we see is our own image – the eternal narcissus. We fail to see more deeply into the weeds, fishes, the pebbles that lie at the bottom. You can just see the bottom of Well Creek. Much easier, as Wordsworth writes of Lake District skies, are the reflections of the clouds. As the dawn begins this morning, and Viv takes the dogs Sid and Molly out, the sky is blue; but we’re set for more cloud. The weather matters more when you’re afloat.

Living on water, writing on water, takes us into the subaqueous rich muddiness and life, deep within the stream that flows within us, swirling with stuff we’d often much rather remained submerged.

St Teresa of Avila contrasted the streams she found within her:

It is as if we were to look at a very clear stream, in a bed of crystal, reflecting the sun’s rays, and then to see a very muddy stream, in an earthly bed, and overshadowed by clouds.

The elements mix at the bottom of the river below us – earth becomes water, then water into air, to become the clouds, reflected as we gaze. It stirs stuff, living on a narrow boat.

My first real thoughts about God were watery ones. Like Catherine of Siena I thought the love of God was best likened to the wideness of the sea, extending beyond the horizon. All we can hope to do is capture a little of that love to ourselves, I thought, as a harbour holds the tidal flow for a little while, and lets it go again. As we cross the only stretch of tidal water The Lark Ascending is ever likely to know, contemplating the human achievement that has held the sea away over the centuries, I’m left wondering about our need to control. Perhaps better to let the flow go where it will.

I wrote this sonnet a few years ago, after reading Thomas Traherne.

And does the sea itself flow in your veins?

The pounding waves that thunder, suck and draw

the shore? The surf that licks the sand, then drains

away, and then, each tide, comes back for more?

Always the same: a vast similitude

that meets, explores, expresses every mood.

Now it reflects the light, some joy-filled hour,

when radiance – jouissance – dances the deep.

Or now the darkness of a grieving sigh

that tunes itself to the distant sob and weep

that pulls forever between the sea and sky.

Traherne thought so. To know the world aright,

the sea flows there, an inner sound and sight.

God’s grace breaks through, because God’s grace is already there, in sea, and tree, in stars, and wild, undomesticated nature. God’ grace breaks through, because the whole world is sacramental. This land knows God and responds with jouissance, with rapture, with vibrant atom. And also, perhaps, with flood and water that cannot be kept at bay for ever.

(with thanks to Andrew Hunter Blair’s Fenland Waterways, 2016)

2 thoughts on “First night aboard at Salter’s Lode”

The header image is from Reed Edge, a watercolour by Lillias August RI.  Used with permission. Visit her website here.