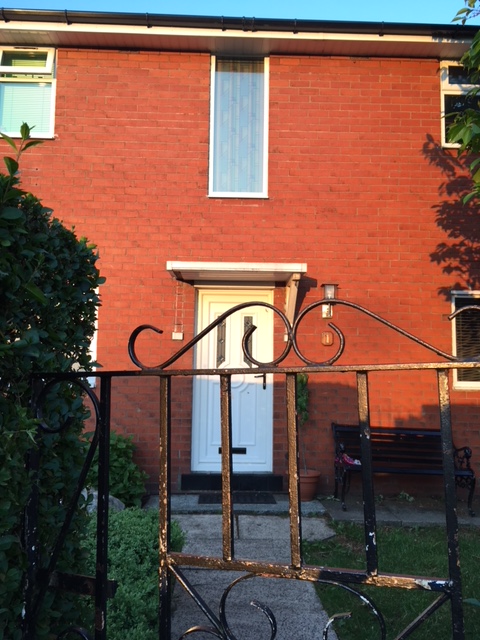 When we lived in Westhoughton, our house was on a housing estate built in the post war period. It was built – the whole estate – of Accrington brick.

It’s a bright, hard, red brick that gives little to the eye, and even less if you want to drill a hole or two in it.

That and the name of the football club – Accrington Stanley – was all I knew about Accrington.

We enjoyed the excitement of the aqueduct over the M65 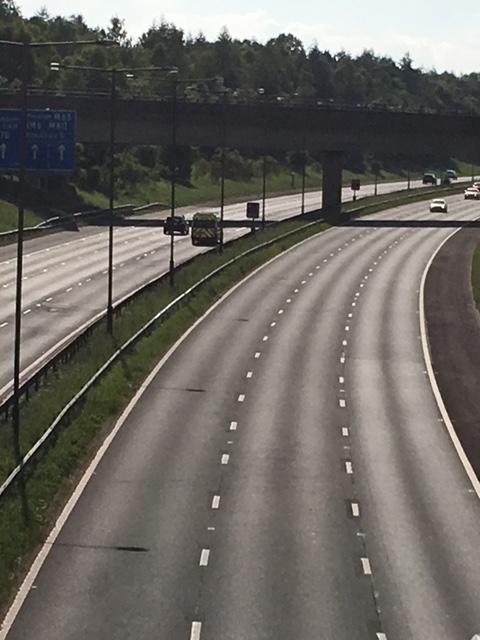 and then moored up at Church, on the outskirts of Accrington, having appreciated the Canals and Rivers Trust welcome. 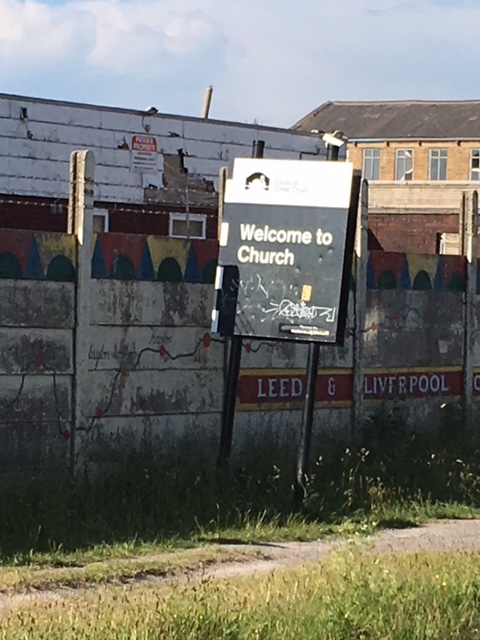 Nice to see a secular organisation welcoming folk in such a way. But the church in Church is sad, very sad. 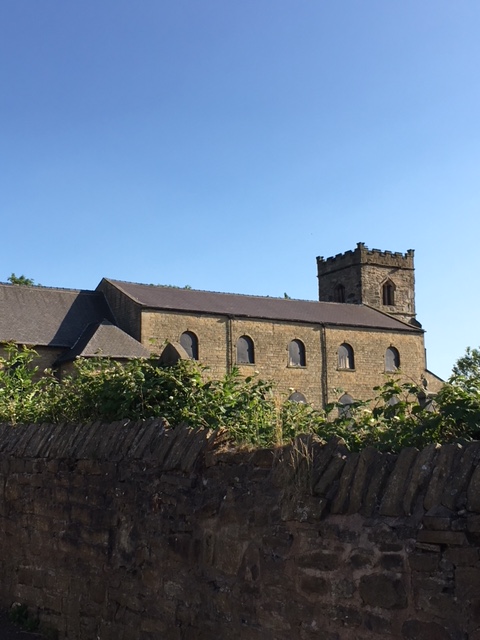 The mooring wasn’t so hot either – given that this is exactly half way between Liverpool and Leeds. 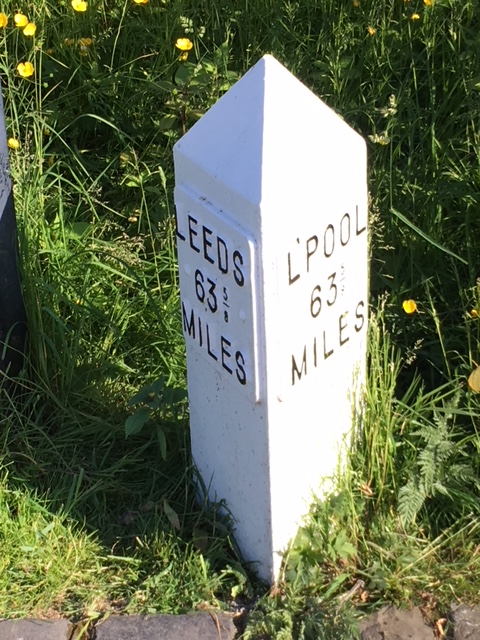 There’s a sculpture to mark the spot. 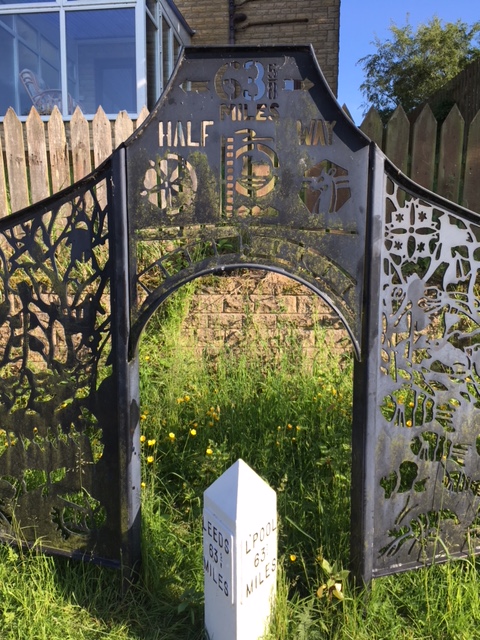 We litter picked the stretch.

And wandered into town, through terraced streets and tired looking shops of Asian clothing and fabrics, with a great, gleaming mosque in sight from the Blackburn Road. It’s the 8.6 million super mosque that caused so much controversy, and opened its doors in December last year.

We walked down to the viaduct that carried the railway line, and then up again, through terrace after terrace, following my phone’s directions. 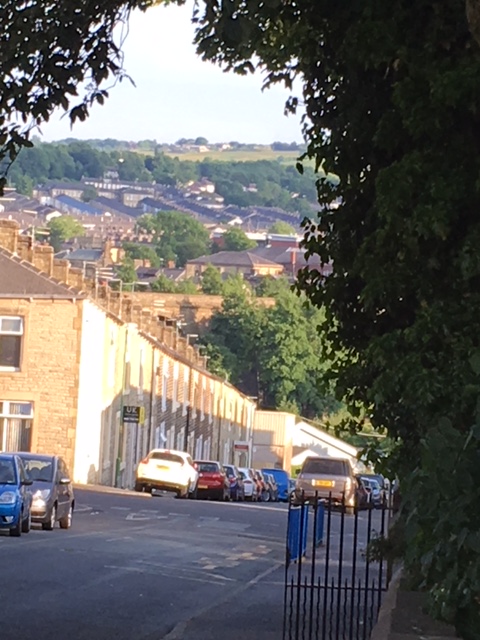 One street we walked was full of St George flags. 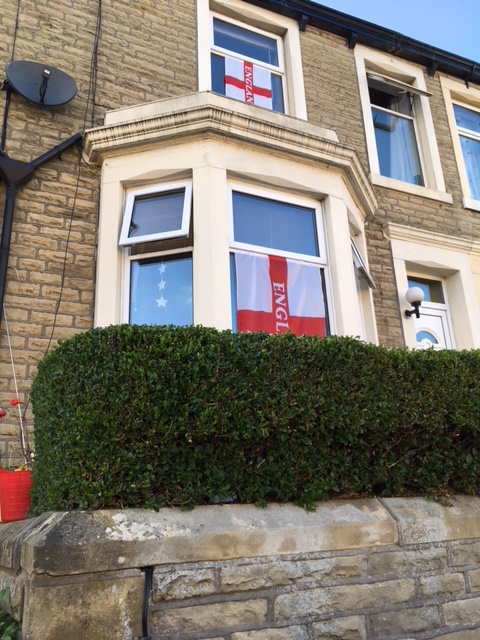 ‘For the world cup’, said Peter. I thought they’d been up since Brexit.

We were looking for the Church of St Mary Magdalen to check the times of services for Sunday. They had a website, but that insisted that we join Facebook, which I don’t want to do. I called the AChurchNearYou number and left a message. Fr Lawrence got back to me later. We said we’d be at the Solemn Mass at 11.

The church was next door to an Aided primary in the middle of steep terraces that ran in parallel down to the town. This was a largely white area, it appeared. We walked past a couple of children, with another inside calling out ‘is that mum come home?’ Perhaps she was the tired women we asked directions, who looked like she held down two or three jobs, and had very little energy for what waited for her at home. Peter surmised her husband, or partner, would be unemployed and depressed, and not much use at all. 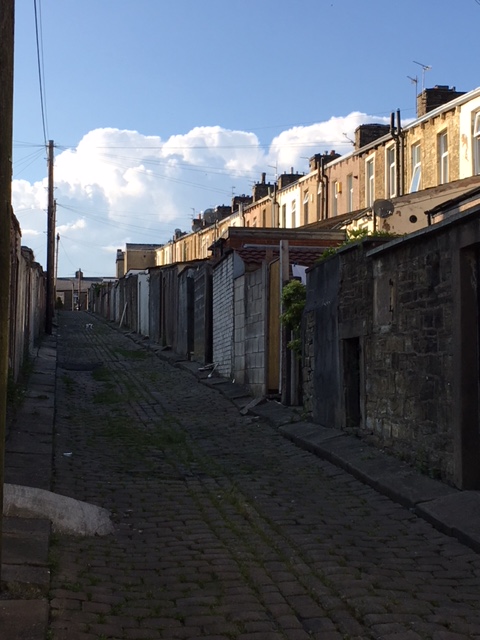 There was a kingfisher at the mooring which we watched, fishing, on Saturday evening. We’re reading Iris Murdoch’s The Black Prince out loud to each other – enjoying her irony and characterisation.

Sunday morning before church. Peter met Dan who used to be in the army and now works at Travis Perkins. ‘I used to fish here when I was a kid’, he said, as Peter picked litter around him. He loves wildlife, he said. Often takes his nephew and nieces to learn the different trees, birds and flowers. Most weekends he heads off down the towpath, rambles along the canal. ‘My wife doesn’t come; she doesn’t want to. I’m happy by myself.’ Broad Accrington accent, that’s hard to capture in print. He was thrilled that Peter was collecting the rubbish.

Towpaths are used more than you’d think. Joggers, cyclists, of course. But also families out walking. One woman and her two boys had walked all the way to Rishton and back. Took nearly two hours. Stunning views out over the Calder valley and to the Pennines to the North. 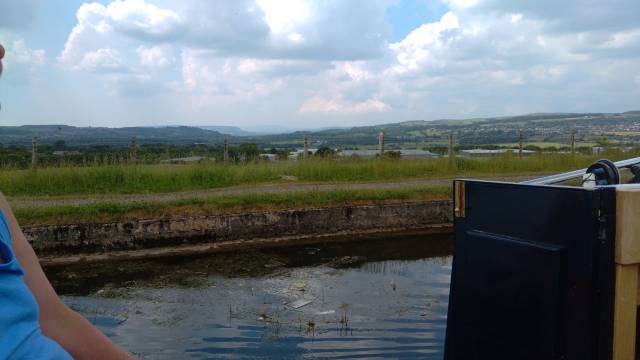 As we came towards Accrington, we saw strange ovens or kilns alongside the canal and wondered what they were. The answer is here.

I thought they might have been old brick kilns. But no.

The bricks were produced on an altogether bigger scale. Accrington brick is often called nori – why? Because the letters IRON were accidentally placed backwards in the brick moulds thus spelling NORI. Well – that’s the story.

They were produced here, at Altham near Accrington, from 1887 to 2008 and – good to know – again from 2015, in response to the need for building materials. The bricks are famed for their strength, and were used for the foundations of the Blackpool Tower and the Empire State Building. The bricks are also acid resistant, so are used for the lining of flues and chimneys.

Why here? At the end of the Ice Age, the River Calder was blocked and formed a large lake in the Accrington area. The sediment from this lake produced the fireclay seams and local coal was available to fire it.

There were four brickyards originally, producing engineering bricks (Enfields, Whinney Hills) and specials. Specials were hand thrown into plaster of paris moulds. They could be extremely decorative.

The site had its own mineral railway connecting with the East Lancashire Line at Huncoat Station, and was once managed by Marshall Clay Products, then bought out by Hanson, a subsidiary of the multi-national Heidelberg Cement group, in 2005. The 2008 recession hit and the factory was mothballed, with the loss of 83 jobs.

Following an upturn in new house building, Hanson reopened the Accrington factory. Production started again in January 2015, with the factory having capacity to produce 45 million bricks a year from the adjoining quarry which has between 30 and 40 years of clay reserves. It’s worth reading this. A BBC report on the re-opening of Hanson, with an explanation of how bricks are made by crushing the clay and mixing with water, to mould into different shapes and sizes, and then firing at a very high temperature to make the product hard and weather-resistant.

Sunday morning, and we made it in plenty of time for church at St Mary Magdalen, finding a faster route through a much newer housing estate. It was the walk of witness that afternoon, we were told, explaining the empty pews. ‘We’ll just have to move around a lot’, said Harry, just in front of us, as he caught up with three women in front of him. The choir of four women sang lustily, holding the tune in the absence of the organist. ‘He’s got the lurgy,’ explained the vicar at the beginning of the liturgy.

But no youngsters either.

As we left, Fr Lawrence was thrilled to hear that Peter had trained at Mirfield. I’m not sure he’d have been as thrilled had he known I was ordained. ‘That’s a pretty dress’, one of the women said to me. 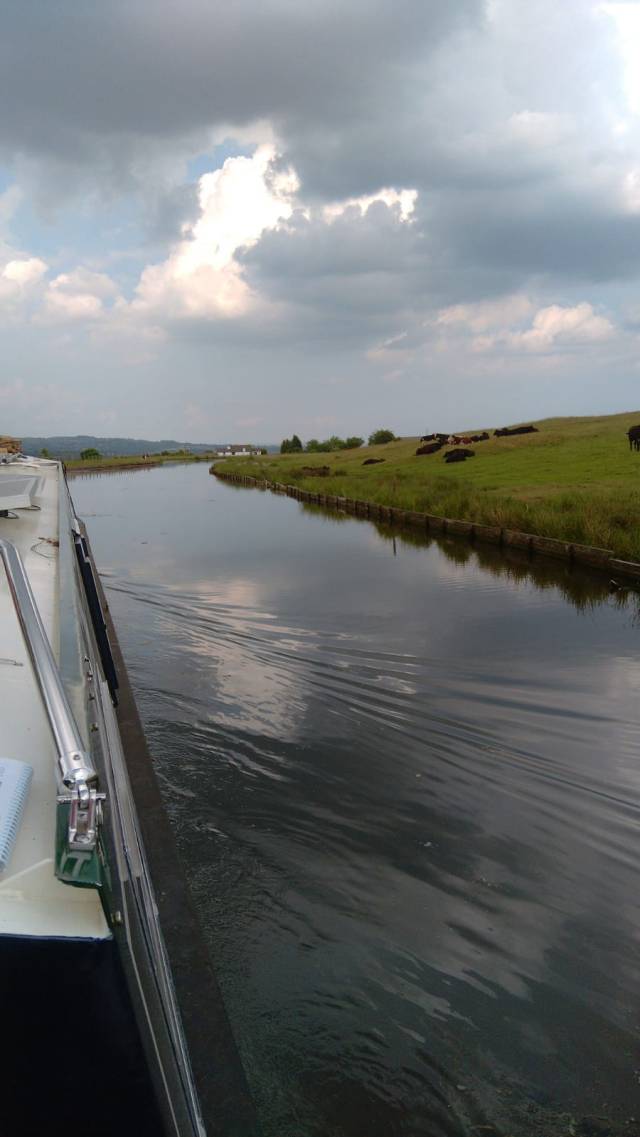 Onwards, as the canal contours around fields along the M65.

Junction 8 was our turning as we drove home from the Lakes, down the A56 to Bury, when we lived there. ‘Do you remember we saw a boat when we were driving along the motorway? How surprised we were there was a canal so high up?’ Said Peter. ‘Who’d have thought we’d be here, now.’ ‘I reckon that car, there, is saying exactly the same about us.’ I conjectured.

Onwards, slowly, to Hapton. ‘Best on this mooring’, said Dave (who we’d first met at Botany Bay, giving us a lift into Chorley), as he chugged past. He’d been at the party the night before in Blackburn. ‘There’s gypsies just around the corner’. We had already moored. We were tempted to move, and find that further mooring.

Instead we wandered into town, over the motorway to find the station, and then stopped at the Railway for a pint of Theakston’s on the way home.

I’m off, on Monday, for an overnight session with Heather and Elaine, to revise Theological Reflections: Methods. Elaine lives in Frodsham, so it’ll be a bus back to Accrington, then train to Preston, then to Warrington Bank, and then to Frodsham.

Peter’s looking forward to the peace. But he better not read any more Murdoch until I get back.

One thought on “Accrington Brick”

The header image is from Reed Edge, a watercolour by Lillias August RI.  Used with permission. Visit her website here.